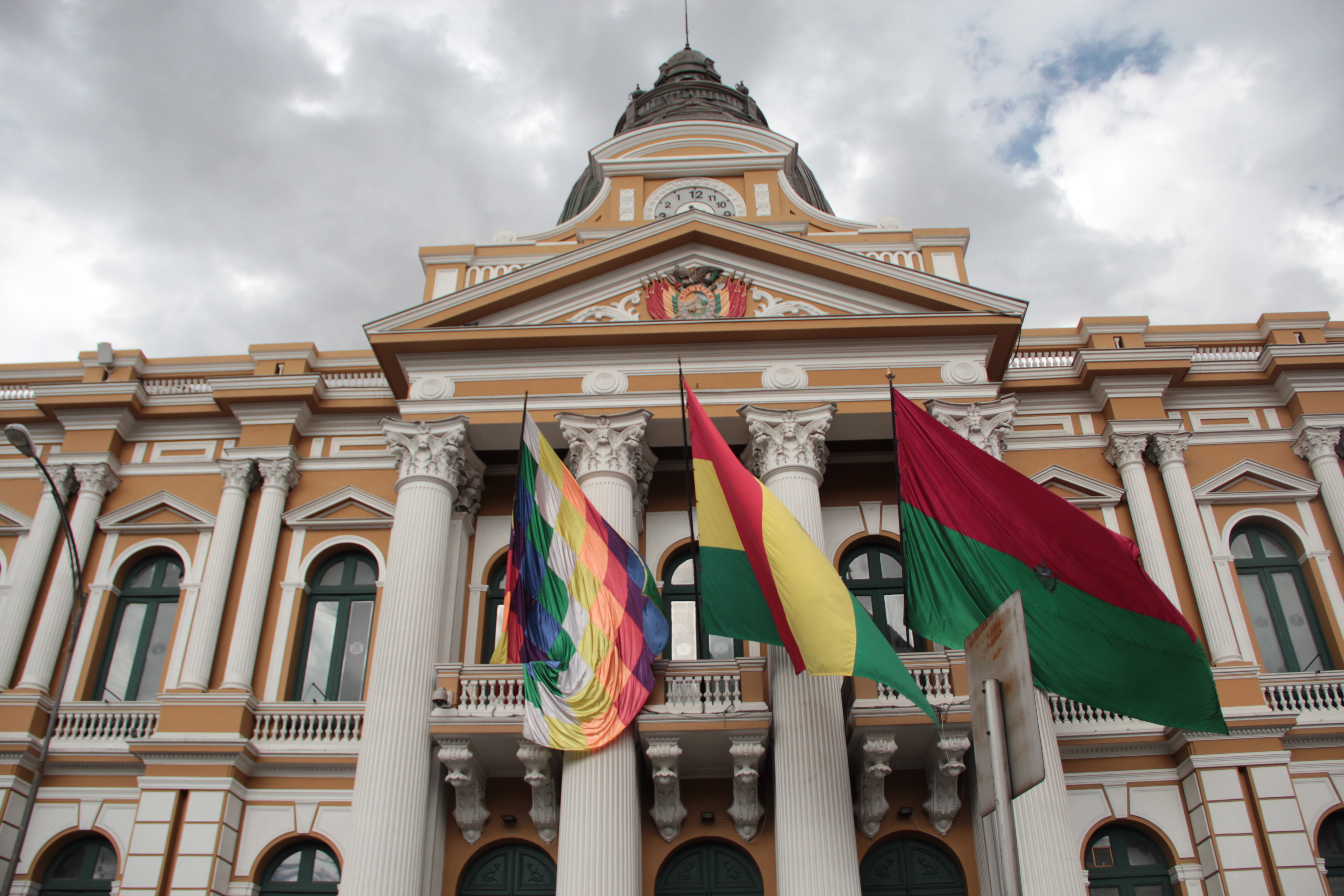 From Puno we take the bus to La Paz and after a few hours drive, we reach the border.
We cross the border by foot and then it’s already time for a new passport stamp! Something that makes us stamp junkies very happy :).

After arrival in Bolivia, we first need to cross another part of Lake Titicaca to be able to continue to La Paz. Crossing the water turns out to be quit the challenge.

Everybody leaves the bus and needs to cross the water on a speedboat. Doesn’t really sound that challenging? Of course the bus itself can’t fit a tiny speedboat and therefor needs to be pushed on some kind of wooden raft. To get on the raft, the bus is pushed on shelfs that need to be moved up front by a Bolivian boy, in order for the tires to get back on it.

The raft isn’t the most stable one and the bus rocks back and forth, while we’re on the other side saying silent goodbyes to our luggage already. However, after about 20 minutes the bus reaches us safely.
This is typically Bolivia.

As soon as we drive into the landscape of Bolivia, the surroundings and the people look different. Faces are characterized with red cheeks of harsh wind and the mountains are more untamed.
It’s pretty unlikely to see such a different only five minutes after crossing the border. Is that even possible? Who knows.. after all it’s just our own experience.

After a bus drive of 10 hours we arrive in La Paz. It’s late in the afternoon and there is a huge traffic jam in the city. Our driver decides that he can’t reach the bus terminal and tells everybody to just get off at this random place in the city.
Before leaving we have studied the map to our hotel pretty well, so we decide that it can’t be far and bravely we pull our trolleys through the crowd of people in search for our hotel.
Luckily we find it within 15 minutes.

Right from the start La Paz turns out to be a crazy, crowded, hectic city. A totally different kind of chaos than Lima, more old fashioned, more dirty, but most certainly also with its own charm.

We are lucky today, the 16th of July is Independence day in Bolivia and it’s one big party in the city. After our long journey we’re not necessarily in a party mood, but we decide to drink to Bolivia’s independence with a traditional drink at one of the fun drinking stands downtown. The drink consists of whipped cream, condensed milk, some spices and of course alcohol. It’s sweeter than sweet, but definitely tasty.. Salut!

In Peru we are a little bit spoiled with kind and helpful people. In Bolivia we quickly notice that there is a slightly different mentally towards strangers. Bolivians are also kind people, but just a bit more distant and less approachable. Later on we hear that this is truly a part of their culture, you first have to win someone over and then you’re in for life.
We are only here for ten days to win some people over, but hey; challenge accepted!

On our first day in La Paz we cross a very beautiful square, called “Plaza Murillo”. The days after we keep coming back to this square. There’s always happening something, it’s the best place to do some people-watch and there is always someone who is coming over to chat a bit. Especially the Bolivian grandpa’s have their eye on Kavita and like to talk to us.

The square is named after Pedro Domingo Murillo, a freedom fighter who plays an important role in the independence of Bolivia. During the weekend of the 16th of July it’s super crowded on the square, because people come to honour him. They even hire an actor to play the role of Murillo.

The first few days exploring the city, we notice that Bolivians are very focussed on their families and we see a lot of young, teenage parents. Later on we learn that this is supported by the government through commercials and allowances.
The city organizes a lot of events for the entire family, like little plays on the street, and families go out together to relax on the city’s squares.

During these family outings, eating seems to be very important. From the wide variety of snacks to drinks, everything is sweeter than sweet.
The only exception is the popcorn, which is offered in huge portions on wheelbarrows. One way or the other, at the end of the day all wheelbarrows are empty.

In La Paz we take part in the walking tour of the organization “Red Cap”. With an entrance fee of only 3 euro’s and a very interesting tour, this is a must do for your trip to La Paz.
The tour guide shares a lot of interesting stories about the city and the country, some funny or nice, some a little dark or worrying.

An interesting and funny story is the one concerning the folkloric outfits of the Cholita’s. Cholita’s are the traditionally dressed women, mostly firmly build and with long braids in their hair, wearing long, thick skirts, a vest and always a high, small hat in an earthy colour.
The hat was not always a part of the outfit, but became a part of it in a very funny way.

A Bolivian entrepreneur once ordered a huge stock of hats from Italy, with the plan of selling these as the newest European trend to the Bolivian men. The hats turned out to be way too small and couldn’t fit the head of any man.
‘What to do with all those hats’, the salesman must have thought.
He found a very commercial solution: he invited some important Cholita’s to his parlour and told them these hats were the latest fashion trend from Europe. The ladies loved it and started wearing them. As influential as these social ladies were, all Cholita’s wanted to wear them and it became a huge trend.

After years the hat became symbolic for more than just fashion, it showed the marital status of a woman. If the woman wears the hat up right, it means she’s married or taken. Any other position means she’s available for a relationship.

Of course with the Spanish suppression, Catholicism became the leading religion in the country. In La Paz local people were persuade to support the construction of a new cathedral by allowing them to have Pachamama influences in the in- and outside of the building. Today you can still see the signs and symbols on the Church walls and ceiling.

A very different kind of story has to do with offering, following an old Bolivian tradition.
They believe that when you want to construct a new building, you need to pay an offer for the use of the ground first. The size of the offer depends on the size of the planned building. For something small, you can offer food. For a regular house, the offering of an animal will be enough. However, for big and public buildings the ground requires a much bigger offering… maybe you can guess by now.
Still to this date there are human offerings brought to construction sites!

Let’s state very clearly that it’s not allowed by Bolivian law, but human remains under buildings show that it actually still happens. Medicine men roam the streets at night looking for drunk hobo’s and lure them to use for their offering. There’s a movie about this topic and it’s called “Elephant Cemetery”. When back in Holland we’ll definitely try to see it.

If this is a true story or an urban legend, we’ll never know. We’re still in shock though and stare at our guide with huge eyes.. brrrr.

During our visit in La Paz we make us of the tips and advice on www.lapazlife.com, one of them being a visit to Calle Jean, a colourful, artistic street with beautiful colonial architecture.

During coffee break we’re approached and interviewed in funny Spanglish by a beautiful TV host of the Bolivian television, who would like to know where we’re from and what we think of La Paz.
Our 15 minutes of fame! Although they were actually only 2 ;).
Unfortunately we didn’t see the airing of the show.

With La Paz as base, you can do as many tours and excursions as you’d like, one of the most famous ones being biking on the “Death Road”.

The Death Road is an unpaved road connecting La Paz with different cities, going straight through the jungle. Until a few years back, a lot of drivers suffered deathly accidents because of the road’s steep and crazy curves. In the last couple of years they’ve constructed a new road, making sure cars and trucks don’t need to take the unpaved part anymore. Because of this the accidents have decreased enormously. But especially this unpaved part is amazing to bike on a crossbike.

Kavita is not realy interested in biking down a 16.000 feet mountain, but Jolanda can already feel the adrenaline kick in and takes on the challenge.
Together with Kimberly, who we meet earlier in La Paz, we gather at one of the highest points of La Paz, ready to cross our way down.

The first part of the road goes through the mountains and creates stunning views over high peaks and deep, green lows.
Because it’s early, there is still some fog to make the view just a little bit more amazing. Because we are biking the paved part of the road we can actually enjoy the views, this is still the easy part.

After biking for an hour we face the separation of the paved and unpaved road, this is where the Death Road starts!

Crossing down the path is really, really cool! It goes so fast, the bike slips every now and then, you might get a little scared peeking down into the valley, but it’s just so awesome!
It takes us about 1,5 hours to bike down and it feels pretty special to start off in the cold of a high mountain and end up in the misty warmth of the jungle.

This is all still typically Bolivia though: the last 15 minutes a few brakes stop working. The guide doen’t really care, because ‘we are almost there’.
But brakes or no brakes, can we please go again?! 🙂

Later on the week we plan a two day trip to Uyuni. From Uyuni you can take a tour to the Salar de Uyuni, one of the biggest salt flakes on earth and the main reason for us to come to Bolivia.

We take the night bus to Uyuni, which we both kind of hate. But this time it’s very practical, because we arrive in the morning and can directly go to visit the Salar.

The salt flake is everything you’d expect of it. Because we did a one day tour, the start of the day was a little bit too touristic. We keep bumping into different groups and couldn’t really experience the “all alone on the world” feel yet.
But then our guide takes us to a secluded place in the middle of the flat to see the sunset. It’s just us and our small group.

It’s a truly fantastic moment we honestly can not put in words and therefor we’ll let the pictures speak for itself. Enjoy :). 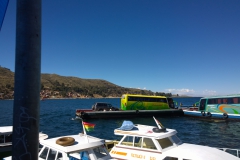 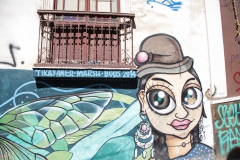 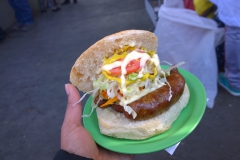 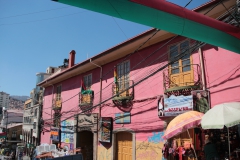 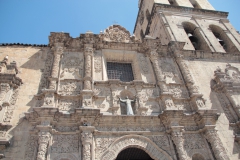 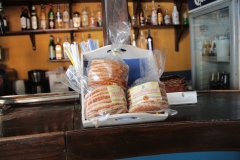 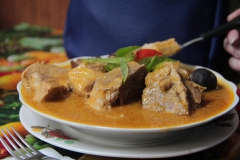 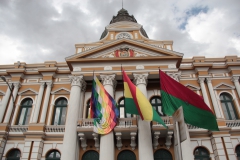 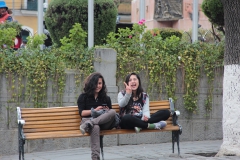 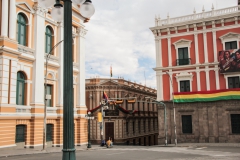 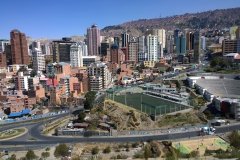 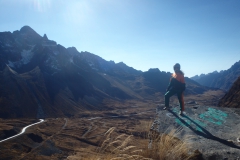 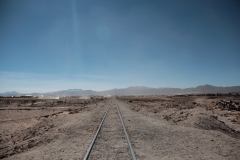 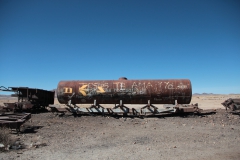 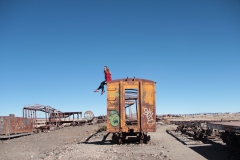 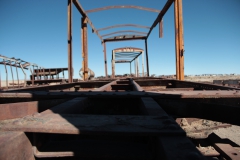 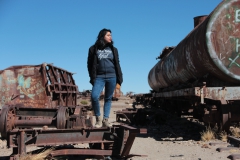 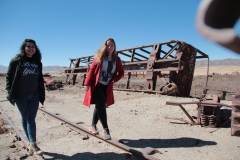 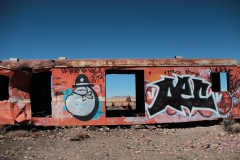 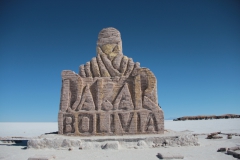 [Dutch version below pictures] From Cusco we schedule our tour to Machu Picchu. A lot of travelers choose to do a...

[Dutch version below pictures] Guyana, Suriname, Curacao.. we’re six weeks along and again we ended back up in...