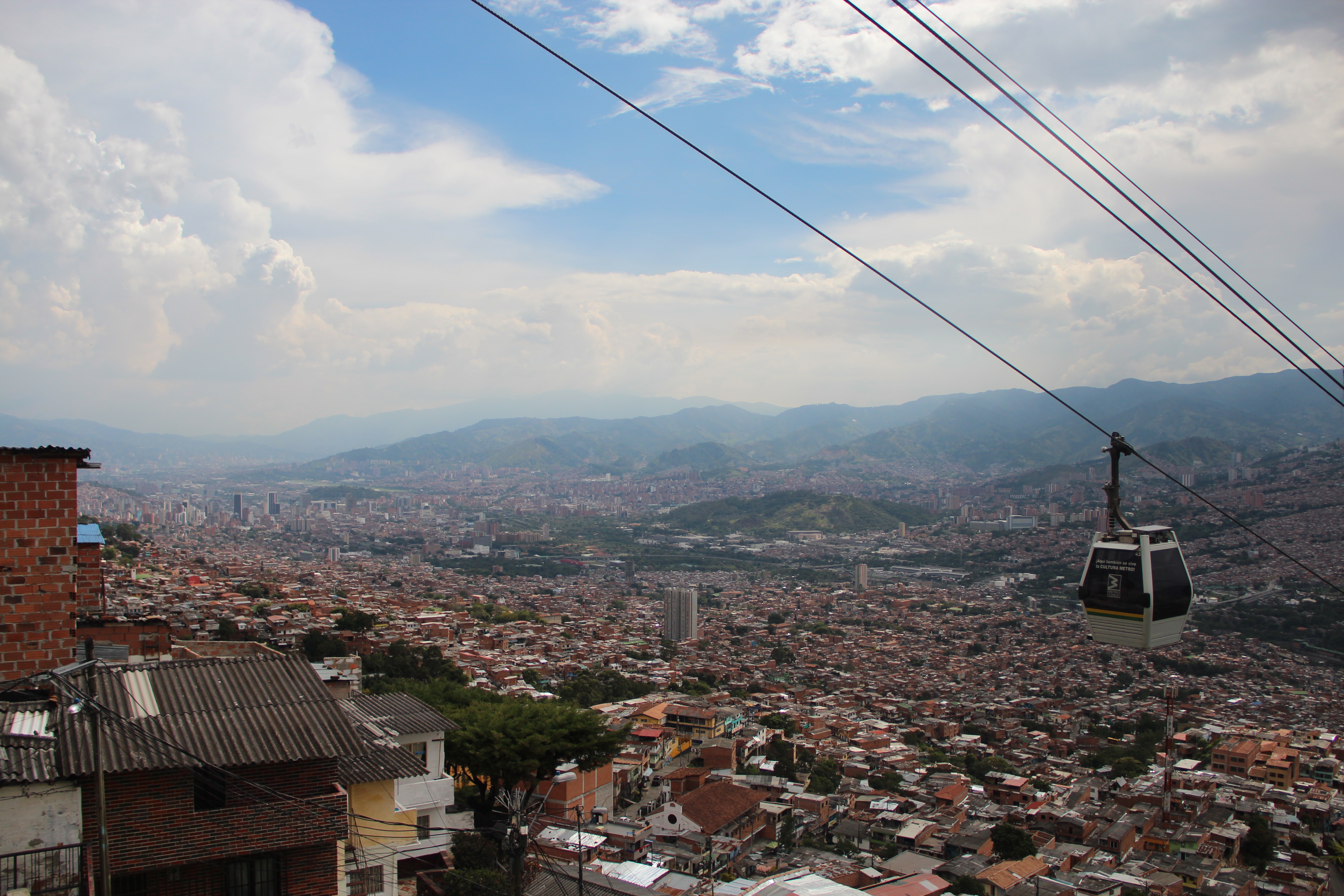 Medellin is awesome. End of story!

This statement pretty much says it all, but of course we love to tell you more about Antioquia, a province in the Northeast of Colombia with Medellin as its capital.

Colombia is getting more and more popular as a travel destination for European tourists and also in Holland we see their slogan ‘The only risk is wanting to stay’ in commercials or in the paper a lot. And did we want to stay.. And mostly because of Medellin.

Although we said about more cities that we feel their vibe, we feel Medellin the most of all and we know for sure that we’ll come back here one day. The friendly people, the Western aspect with its modern shops and metro’s, the night life, the lovely spring weather all year round and all the beautiful green throughout the city, there are just so many reasons to love Medellin.

During our time in Antioquia we even come back to Medellin three times! The first two times we stay in the hip neighbourhood “El Poblado”, this is where most tourists stay. We stay in hostel “Casa Kiwi”, which is a recommendation if you love an open atmosphere with lots of common areas, without being a diehard party hostel. Later on we stay in a beautiful apartment through Airbnb. We choose this one mostly because of the pool in the building, but that one day we want to go swimming it turns out to be closed.

In Casa Kiwi we meet up with some of our friends from the San Blas adventure and we are mostly exploring El Poblado’s night life. We especially like the club “Deck”, where there are good cocktails, there’s a lot of reggaeton and fun people. Time to shake that booty!

The third time that we’re in Medellin, we stay in the neighbourhood “La 70”. As popular as El Poblado is for tourists, this is what La 70 is to “Paisa”: that is what people from Antioquia call themselves. Also in this neighbourhood we rent an apartment through Airbnb. We do grocery shopping, we cook, we have friends living in our neighbourhood. For a short period of time, it feels like living there.

A few years back, Medellin has been announced the most innovative city of South and Mid America because of different progressive projects, of which the new metro system is the most important one. The metro has in this huge, mountainous city a lot of added value and that for an honest price of 0,80 eurocent per trip.

We see a lot of the city. Tips are for sure “Pueblito Paisa”, a replica of an old Paisa village build on top of a mountain in the city centre, which results in stunning views of the city. On the same mountain there’s an interesting museum of Medellin’s history. In Spanish of course! We also love the Botanical Garden, just as “Parque Explora”, which is right next to it. This museum has, next to a huge aquarium, four big interactive rooms, where you can do all kinds of scientific games and tests. Here it wasn’t hard to entertain the kid in ourselves for an afternoon!

A metro trip to the neighbourhood of “San Javier”, also known as “Comuna 13”, is worth your time. You’ll find another famous project of the city, huge escalators build within the “barra” (neighbourhood) to improve the mobility of people from this poor neighbourhood. Alongside the escalators you can find stunning street art.

Medellin also offers you more than enough musea, with “Museo del Arte Moderno” being our favourite. Mostly because regularly there’s a food truck festival just outside!

Through the organisation of “Real Walking Tours Medellin” we go on an Exotic fruits tour, which guides you over one of the biggest markets of Medellin and has you taste over 16 different kinds of fruit. There really are species we have never seen, which is impressive as Kavita is kind of the uncrowned exotic flora queen! Although with 15 euro a little pricy, we recommend it.

Just as in the other big cities we go looking for a free walking tour and end up doing even two.

The walking tour of “Real Walking Tours Medellin” is very popular and everybody recommends it. Although indeed very informative and led by an enthusiastic guide, with four hours we feel it’s taking a little too long. It does give you a very clear view on Colombia’s history, in case you didn’t look that up for yourself. The tour also takes you to the shop with the best empanada’s of the entire town, for some reason enough to go?

Our favourite walking tour is a tour through the neighbourhood “Santo Domingo”, which you can reach with the cable carts, part of the metro system. Every Saturday and Sunday at 14h a group of kids that is trying to learn English is giving a tour through their neighbourhood. The project is initiated by an Australian girl and is being led by a super nice and funny dude from England, Casey. With a lot of passion and humour he guides the boys and girls.

Santo Domingo is the kind of neighbourhood you shouldn’t walk around in yourself, but in this setting it’s totally safe. The boys talk about their life, show where they live and answer our questions. One of our young guides is clearly impressed with Kavita’s camera and even takes a few pictures for us.

So which empanada’s were actually the best? We’d say they were both good!

From Medellin we travel to Guatapé, a relaxed and colourful village known because of its high and bullet shaped rock “del Peñón” and the big estate Pablo Escobar used to own there.

We stay in the “Rock a Town” hostel, basic and fairly priced, on a good location with super friendly staff.

Of course we want to climb the rock to see the famous view. From step one there are signs telling you how much more steps to go, starting from 800. Sounds doable, right? Although it feels like we just did an Insanity workout, we make our way to the top pretty quickly and indeed, the view is worth it. All the small islands look amazing from above, especially with the sun out and the waving Colombian flag in our sight.

During the climb we meet Naomi, together with her husband and little one Miliano. We still don’t speak a lot of Spanish and she doesn’t speak English, but huffing and puffing is international and that creates a bond. When we reach the top, Naomi treats us to an ice cold “MIchelada”, a variation to the Mexican cocktail; Colombian beer with lime, salt on the edge of the glass and a piece of mango in it. It’s good!

In Guatapé we also take part in a Pablo Escobar tour. The guide tells us about the estate and we walk around the ruins, but the information is a little superficial and the guide isn’t really able to answer our questions. After the tour we still don’t really know who Pablo Escobar was. Time to see “Narcos” after all!

As a part of the tour you can play a game of paintball in one of his old houses. Kavita rather stays on the side line, but Jolanda can’t wait to get into that suit and shoot some! During one of the games she’s picked by the guide as Pablo Escobar, which sounds very cool. But soon enough it turns out that it means hiding most of the game. This gets boring pretty quickly, so she just comes out to help shoot some ‘bad guys’. Not very much appreciated by her team mates, as it endangers the game… Whatever!

Our longest stop of Antioquia is in the little village of San Jeronimo. Through the website www.workaway.info we find Hostal “La Finca” (www.hostallafinca.com), where we work for two weeks in exchange for a free place to stay. We clean, work at the reception desk, give tours to guests and work on own projects such as social media and cleaning up of financial documents. When the owners leave in the second week, we are handed over the entire responsibility of the finca and run the hostel for a small week.

The hostel is owned by Alexis and Mathilda, a couple from Germany. Alexis is half Colombian and when he was young his Colombian mother took him to the family finca every summer holiday. A finca is a mansion out of the city, mostly used as holiday destination. It’s been his dream to open up his own and he more than succeeded with La Finca.

The Finca is located on a beautiful spot just outside San Jeronimo, from where you can hike to different waterfalls, go have a drink and chat with charming Don Abraham (such a casanova 🙂 ) or just chill out and hang by the pool.

The positive and warm energy of Alexis and Mathilda is spread throughout the finca, there are no obligations and you can do about almost anything you want. As long as there is respect for each other and the surroundings, the possibilities are endless and Alexis and Mathilda help their guests with whatever.

You also notice that in the staff that works on the finca. Nice people, proud Paisa’s that love to make you feel at home. Young and headstrong Luisa, who just loves to learn as much as possible. Sweet and quiet Aurora, who we also encounter during one of our walks outside and invites her into her home. The gardener Isaias, who invites us after work to walk with him to his house and caring gives us a piece of chocolate for the way back. It is a hike of 30 minutes up the hill, so the chocolate came in handy. Let’s not forget Cania, the finca’s dog who is friends with just about anybody.

We also check out the coffee farm of Reinaldo, a 45 minute hike up the hill from the finca. Reinaldo is taking over his father’s company, who you can still see walking up the hills by the age of 80! Reinaldo has so incredibly much passion for his work, it’s touching, contagious and you can taste it in his coffee. During our tour he plants two new coffee plants and names them Kavita and Jolanda. So, in a few years we’ll have our own coffee! 🙂

Our two weeks in San Jeronimo fly by and is without doubt one of the highlights of our trip. If we think back to the finca, it’s with a huge smile and we can’t wait to come back to it. Alexis and Mathilda, GRACIAS! We miss your beautiful souls. 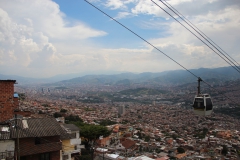 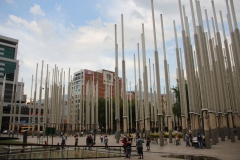 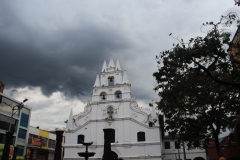 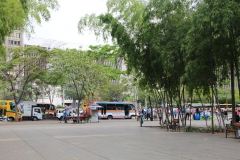 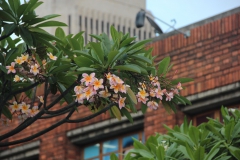 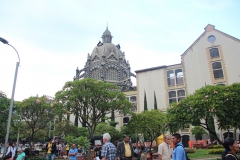 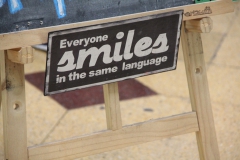 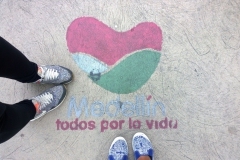 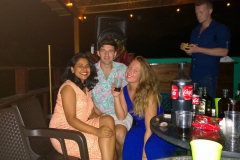 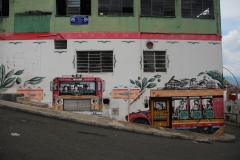 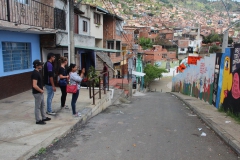 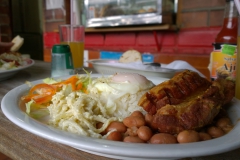 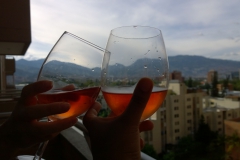 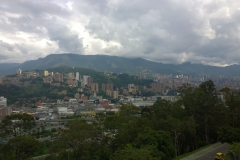 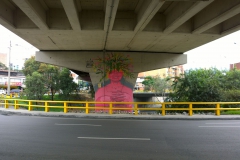 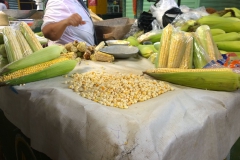 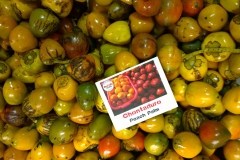 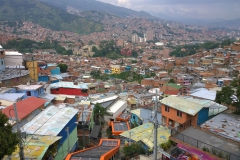 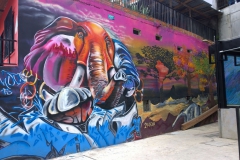 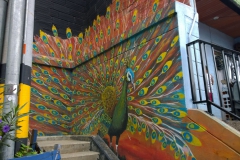 Colombia wordt steeds populairder onder Europese reizigers en ook in Nederland zien we steeds vaker in reclames of krantenartikelen de Colombiaanse slogan ‘The only risk is wanting to stay’ terugkomen . And did we want to stay.. En vooral dankzij Medellin.

[Dutch version below pictures] Where India might be the ‘Asia for experts’, their girl next door neighbor Sri Lanka...

[Dutch version below pictures] From the start of our trip one thing is for sure, we will be in Suriname in October...