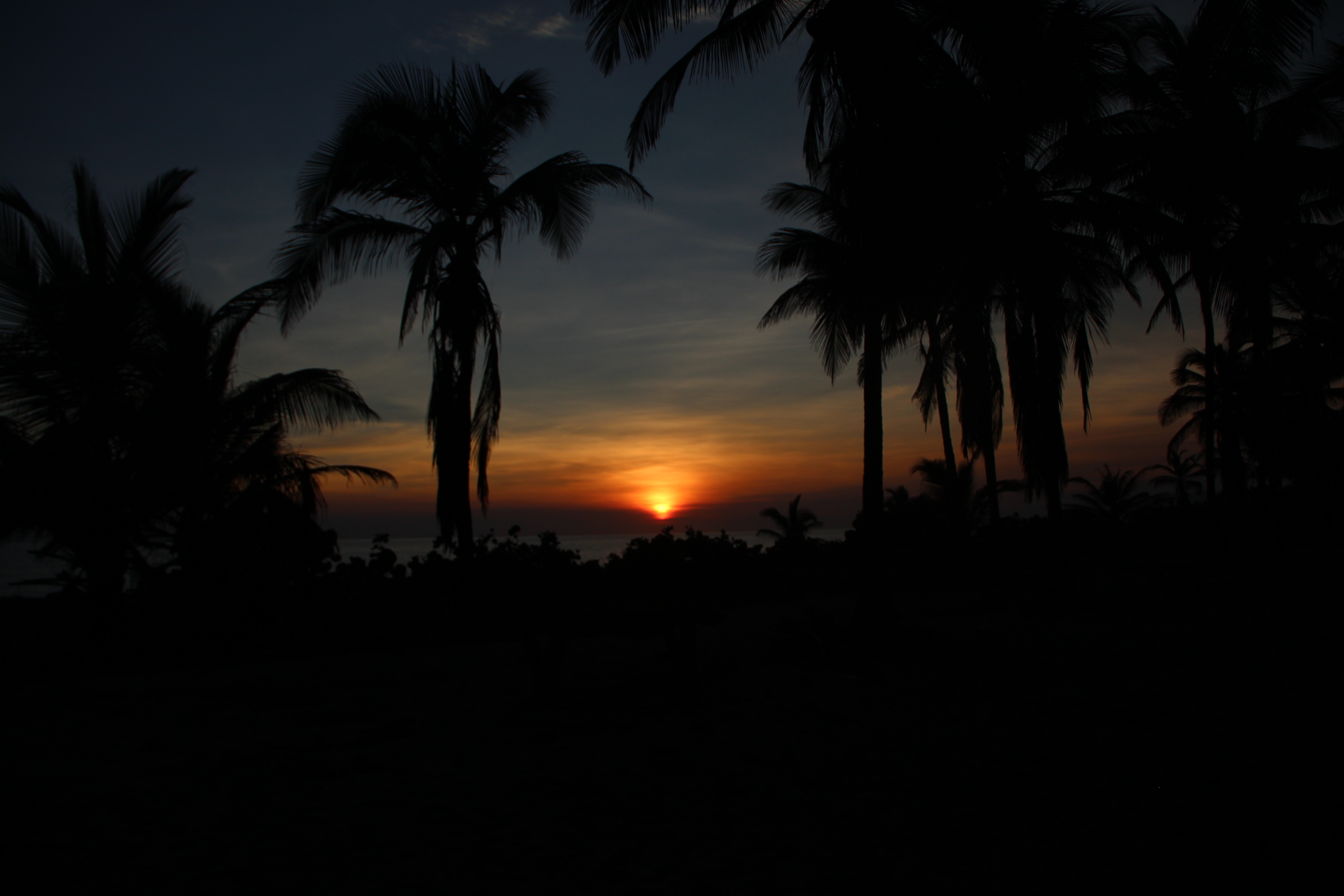 After four fantastic days on the Panamanian sea we arrive in Colombia! Officially we aren’t in the country yet, you can only arrange the immigration stamp the next day, but emotionally we are totally here. There’s music everywhere and the people are friendly, Colombia is tangible from the start.

The first night we close off our San Blas adventure with a dinner and some dancing. Carpurganá is a small village, with one club located on the roof top of a small building. The fan isn’t very effective and the boxes keep breaking down, but that only adds to a fun night with good cocktails and good music. While dancing we start off our Colombian adventure!

After a few days in Capurganá we take the boat to Necocli. From there we’ll take the bus to Catargena, our next stop.

The boat to Necocli leaves from Capuganá fully loaded. Quickly it becomes clear that we are meant to pick up a lot more people along the way, but the boat looks full. But after two months of travel we’re aware that a boat in South America is never really full and indeed, everybody fits. Like our Australian travel companion Peet says: “People who say ‘it can’t’, have never travelled.

From Necocli it’s about a 10 hour bus drive to Catargena. Bus travels during the day is still one of our favourite ways of transport, because you get to see so much of the country. For us it’s a nice opportunity to take in the surroundings of Colombia. We drive by lots and lots of green nature, donkeys and men wearing Colombian hats.

We arrive in Catargena at night and didn’t fix a place to sleep yet, so we join our San Blas buddies to their hostel and go from there. Within 15 minutes we find a hotel that is good enough for our first night. The next day we find a place in a very nice hostel, of which we forgot the name, where we have a spacious room and a lovely balcony.

During our first few Colombian days in Capurganá we have got to know one of the most popular foods in the Colombian kitchen, the “patacone”. A patacone is a fried plantain, then squashed and fried again. They eat it as a snack with meat or fish, or as a side dish to a meal.

In Catargena the offer of street food is huge and here we get to know the probably most popular food of them all, the “Arepa”. It’s a kind of sandwich made out of pressed corn. It’s used as breakfast, lunch and dinner, as a sandwich on its own or as side dish. We’re introduced to it by one of our Irish friends and the amazing Irish accent makes it sound like ‘a rapist’. Who would want a rapist?! Although the real name quickly becomes clear, the coming days we keep ordering ‘rapists’… sorry feminism!

Catargena is breath taking. Especially the streets of the neighbourhoods Getsemani and San Diego are exactly as you’ve seen them in the magazines, scenic, colourful, with lots of flowers and stunning wood work. The streets are perfect for a nice photoshoot, but there are just so many people out. Our solution to that is getting up at 7 a.m., put on a dress and some heels and go shoot! We aren’t the only ones with this idea, we bump into more girls posing in front of the beautiful houses and even come across a professional photoshoot for a magazine.

Named after the Spanish city where it’s “conquistadores” (conqueror) mostly came from, the full name of the city is Catargena de Indies. The rich, but mostly bloody, history is symbolized in the stunning street art that can be found all across the city and mostly in the Getsemani area.

Every day at 10 a.m. at the Trinidad square, two Belgian guys organize a free street art walking tour that is a real must see. The tour leads us to incredible art and the stories behind it, which gives us more insight on what the artist is trying to tell us.

The powerful piece under the arch for example, a painting of a stunning Indian woman, symbolizes the start of the colonial area. On the left bottom you can see a Western ship sailing towards Catargena, ready to conquer it. The woman has her eyes closed, because she knows she’ll die soon. Every piece of art has a story and a message like this behind it. Very impressive and very inspirational.

We take our time to discover the city. One evening we are walking downtown, looking for a sports café where we’re supposed to meet up with friends. Clearly lost, someone starts talking to us in Dutch, “What are you looking for?”. Those Dutchies are just everywhere ;). This Dutch guy turns out to have his roots in Colombia, has family in Bogotá and is on a holiday in Catargena. We hang out for a while and drink a cocktail.

That day he bought two beautiful, handmade necklaces on the streets and out of the blue he gives us the necklaces as a present. To remind Colombia by. Such an unexpected and sweet gesture! He might be reading this: gracias Remi! J

After a week of a lot of walking, lots of stunning art, good music during the concert of hip hop group “Kombilesa Mi”, a swinging Zumba class at the “Centro Cultural Ciudad Movil” by teacher David, good ice creams (ice parlour Paradise!) and roof top nights with our San Blas buddies, it’s time to move along.

We leave for Barranquilla, not really a popular place for tourists. We just want to take advantage of this big city to do some shopping and see a movie, just like we would do at home. The shopping is a little disappointing, but the Jason Bourne in the cinema part makes especially Jolanda very happy (Matt Damon fan/stalker!). The area that we stay in gives good insight in the daily life of Colombians in Barranquilla. At night they work out a lot or take walks in the park. A lot of activities are in groups, it’s nice to see that people really go out and mingle in their communities here.

From Barranquilla we travel further to Tyrona Park, one of Colombia’s national parks.

We have just entered the bus when a guy of about 20 years old starts talking to us. “Are you Dutch”, he asks us in Dutch. Raúl from Santa Marta studies architecture in Barranquilla and is in love with the old Dutch architecture. He also has an uncle and aunt living in Holland. Because he is planning to visit Holland in the upcoming years, he started learning Dutch using tutorials on YouTube. Dutch, one of the hardest languages to learn, through YouTube! And he’s even really good too! The entire drive we talk in English and Dutch, and a pathetic try in Spanish, about his study, his plans for the future, our travel journey and our mutual love for sunsets. A very special meeting. In Santa Marta we say goodbye, but not before he drops us off at the stop for our next bus. We hope to bump into Raúl in Holland!

In Tyrona Park we stay at camping “Castilletes”, located on a beautiful palm garden, about a 15 minute walk from the entrance to the park and run by the enthusiastic Yaïr.

The camping itself is right at the beach as well, but the sea is not safe to swim here. The location is still perfect, because the sun rises on our right hand and sets on the left. The coming days we can not only chase sunsets, but sunrises too! The entire park offers no wifi nor cell reception, it’s just us surrounded by beautiful nature.

The first day we take on one of the bigger hikes, heading to “La Piscina”. This is a quiet beach located in a bay. It’s two hours of hiking, climbing and sweating, but mostly enjoying views, nature and monkeys. After this intense two hour hike, the cool of the sea has never felt better and more rewarding.

The second day we aren’t up for such a big hike, but hike to “La Piscinetta”. This smaller beach is not that far off, offers not as much shade as the other and is a little less untouched, but mostly just as beautiful as the first one. At the end of the day we are in luck, we get a lift to our camping from Gustavo, the man with the biggest smile in Colombia!

After three days in Tyrona Park we are very relaxed (because we really weren’t yet after those two months of holiday) and we head back to Santa Marta.

We stay in Santa Marta for a few days, which is a good spot to travel further from. The city itself isn’t as impressive as for example Catargena or Tyrona Park, but there’s enough to do and the city has a nice vibe. It’s actually more a getaway to the beach for locals from surrounding big cities. The Rodadero beach is pretty good, but if you just visited Tyrona Park you’re simply a bit spoiled :).

With Santa Marta we say goodbye to the Caribbean for now, it’s time for another part of Colombia. Medellin, here we come! 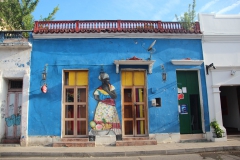 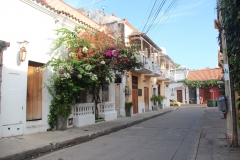 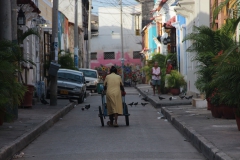 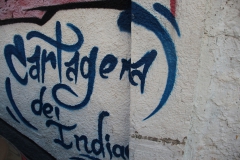 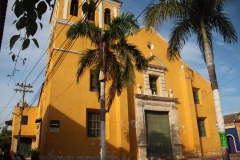 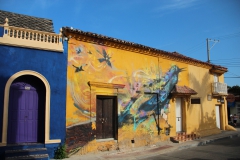 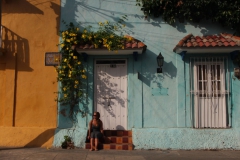 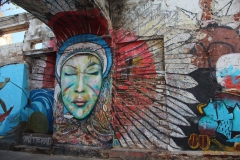 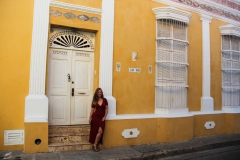 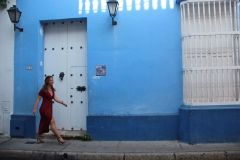 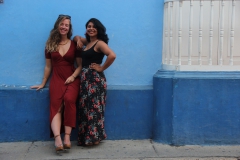 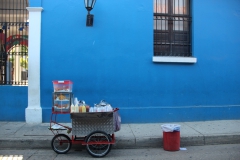 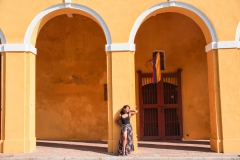 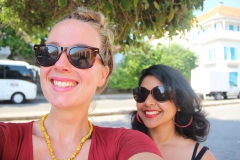 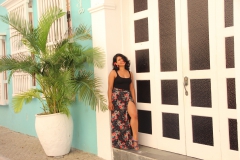 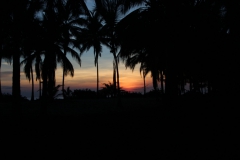 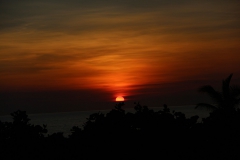 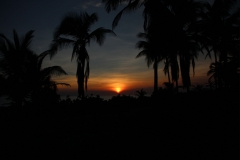 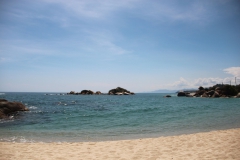 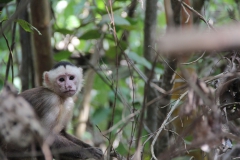 [Dutch version below pictures] Beautiful beaches and beautiful cars is what comes to most people’s minds when...

[Dutch version below pictures] It’s June 2017, Kavita just got back from Suriname and we’re sipping on some good...